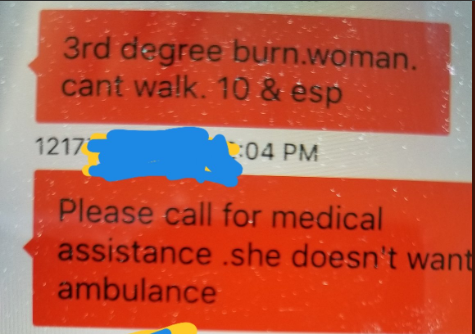 A woman at Burning Man out in the middle of the Black Rock Desert was seriously injured with third degree burns and was unable to call for help by any other means.  There being almost no cell service, and her location at the far periphery into the desert, a good Samaritan called for help using the Gotenna Mesh network which allows text and gps messages even when there are no cell towers.

A really killer feature of Gotenna Mesh is that a message like this can be sent and it will hop from Gotenna device to Gotenna device in mesh fashion or p2p up to six times. The distance of each hop depends on a number of factors, but is generally about a mile or two (or up to 62 miles with elevation).  For example, the woman who was calling for help was at 10:00 and Esplanade or E (the user was confused as to location) fortunately, Gotenna includes an actual GPS location as metadata within the message.

While she may have been out of range for some of the Gotenna Device meshes, I had placed a permanent relay Gotenna device node on the highest mountain overlooking the playa with full solar power to keep it going all week.  So when the message went out, I received it – as did others because of this relay.

However, no one knew where she was. The address she had given (10:00 and Esplanade) was wrong.  Signs had been stolen, jokes had been played on signs all week, and many of the signs were changed to “Larry” or “L” or “Larry4Ever” to show respect and love to the founder who had passed.  So her position was unclear.  Each Gotenna message stores the GPS location of the original sender, and the GPS location of each relay point, as metadata (not visible to other users) but with a breadcrumb trail of all six relays, the resolvable ultimate position would be invaluable to first responders.

There is another killer feature of Gotenna that makes it essential in all first responder’s or those who live in danger’s go-bags. GotennaPlus SMS relay. It’s $9 a year or FREE for up to 30 days each time you install the Gotenna app.  What it does is – if your intended recipient isn’t available by Gotenna, but any one of the six intermediate relays has cellular data or wifi or satellite or ANY kind of signal, the message is backhauled or forwarded out to the internet and then through Gotenna or Twilio’s servers, to the recipient as a text message.  Gotenna and Twilio presumably maintain records of the message AND THE METADATA including at least one GPS location.

Before the event, I had contacted Burning Man Emergency Services, Washoe County Sheriff, and Pershing County Sheriff along with their 911 PSAP centers to confirm that they do, indeed have TEXT 911 operational and to give them a heads-up about this device and the perhaps odd 911 texts they may receive.  They confirmed that there is, indeed, operational text 911 service. What this means is that if you have an emergency and you cannot use voice to dial 911… maybe because the tower is too far, or too saturated with other voice calls, or you are hearing impaired… or any of a million reasons why you may not be able to use traditional voice 911, Washoe County (host of Burning Man) is 100% set up to receive emergency messages via text! The same text 911 capability is 100% operational in all 78 municipalities of Puerto Rico, and thousands of other locations.  For example, Gotenna did a fundraiser to install up to 300 of these Gotenna mesh units to create a backbone in Puerto Rico. Over a hundred thousand of these tiny celltowers in your pocket are distributed all across the world. 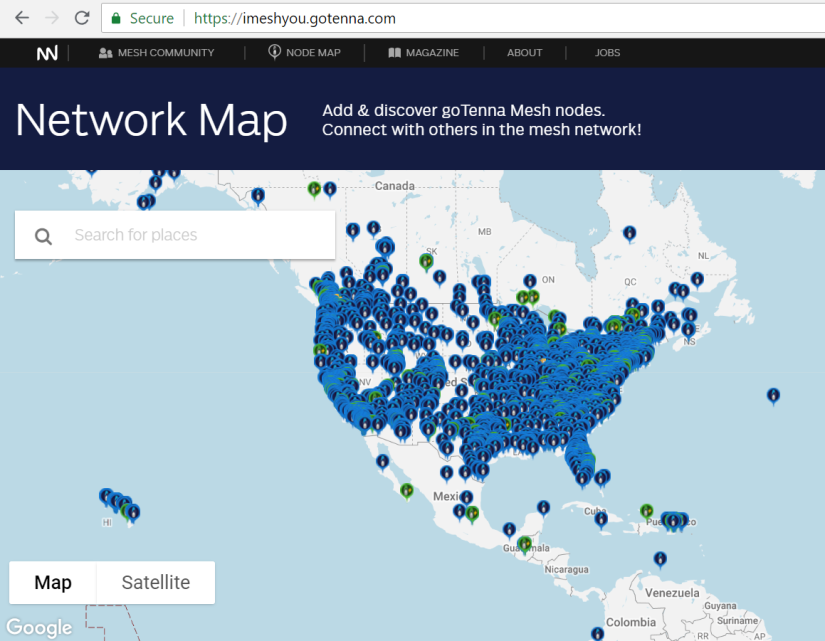 So, the good Samaritan had employed his Gotenna registered and verified to his cell phone number via both Gotenna and Twilio services. He had sent out not just any message, but an “Emergency” message along with the GPS location of the emergency as metadata.  Because none of the Law Enforcement or Burning man people accepted the Gotenna devices I offered them, it was up to volunteers to find a ranger, explain the situation, and deliver it manually, verbally to dispatch help promptly to the user-reported location. (Mind you, volunteers don’t have access to the GPS metada) however, if the message had used Gotenna Plus SMS relay to send the message to text 911, they may have immediately known where she was, had the registered number of the good Samaritan, known the locations of the breadcrumb devices that relayed and the girl could have been saved promptly.  Sometimes it’s mere minutes that can mean life or death.

In this case, we didn’t know where she was, we didn’t know her gps location, we didn’t know the locations of the relays, we couldn’t triangulate, we didn’t have cell signal – so we couldn’t call the good Samaritan. I approached the rangers, asked if anyone else had reported this burn situation. They said no, called central comms for confirmation. No reports. No burnt girl in medical.  They went to find her at the best approximate location I could give (which was wrong). I went to the airport to try to reach the good Samaritan by phone number as there is indeed limited cellular service at center camp and at the airport.  Failing this, I went to the reported location and looked for her.  But, to my knowledge, no one ever found her… and she eventually gave up and walked into the desert to find help.

As it turns out, these messages could have IMMEDIATELY been forwarded to text 911 along with GPS location – and someone’s daughter might still be with us… BUT FOR Twilio’s Acceptable Use Policy which squarely forbids relaying ANY message which is an emergency.  So, they are happy to accept your subscription to relay messages about your cats, but the moment you actually need help… FUCK YOU! Even if there is NO OTHER WAY to reach 911, Twilio: “FUCK YOU.” Even if it could save a young girl’s life.. Twilio: “FUCK YOU.” Even if it could save hundreds of thousands of Boricua in Puerto Rico… Twilio: “FUCK YOU” send your cat pictures, but leave us alone in an emergency. 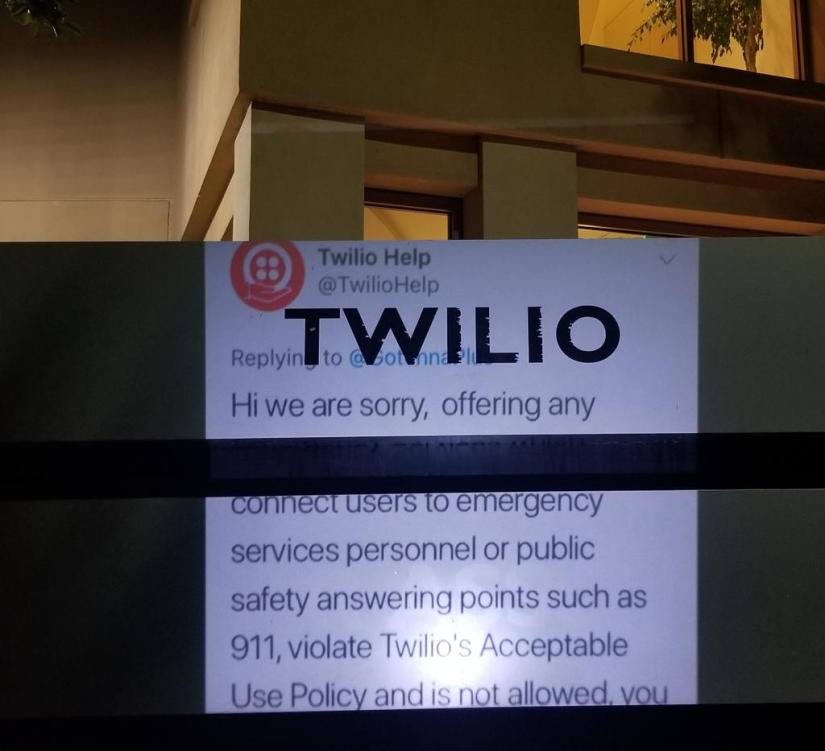 I have made them aware of this by Twitter, Facebook, Instagram, Email (MONTHS AGO), even by sitting vigil at their headquarters with a projector and a ten foot banner. Some of their geeks and support staff came and talked to me and understand the problem. I reached out to every member of their board and their management team. But still do not have any response other than “it violates our acceptable use policy.”

Real lives are on the line here. This isn’t an isolated incident. Hundreds of thousands of these Gotenna devices with Twilio SMS relay are out there in the hands of stupid drunk/drugged kids, in 107F heat, wandering areas of the desert they probably shouldn’t be alone in shock in.  These devices are in the hands of Puerto Ricans and Bermudians and Annapolitans all in the path of severe hurricanes – and when the towers fall again, Gotenna Mesh is (at present) the ONLY device that will enable communications and location sharing.

Twilio needs to find a compromise that allows these survivors to waive warranties (clickwrap license?) and at least TRY to forward their emergency messages to 911 services where they exist.  Gotenna intelligently and selectively sets frequency and power based on GPS location at each use; they should include a subroutine that determines text 911 operability as well.  Gotenna should have a conspicuous disclaimer that although they offer “Emergency” and “SOS” messaging and SMS text relay – that even in areas with operational text 911, that this feature will not work – OR SIMPLY MAKE IT WORK! Cut the red tape, cut the over-regulation, ignore Twilio’s “acceptable use policy” or find another sms/text relay service like e.g. Broadband which ALLOWS 911 emergency relay.  Whatever the solution, it is clearly NOT the status quo… 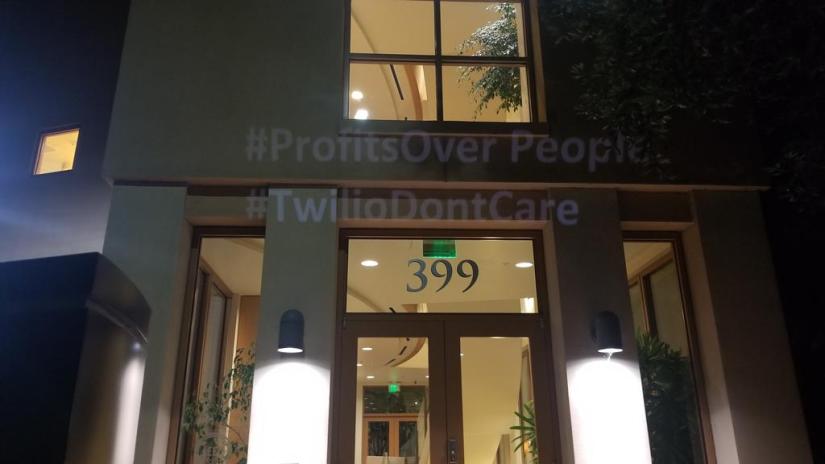 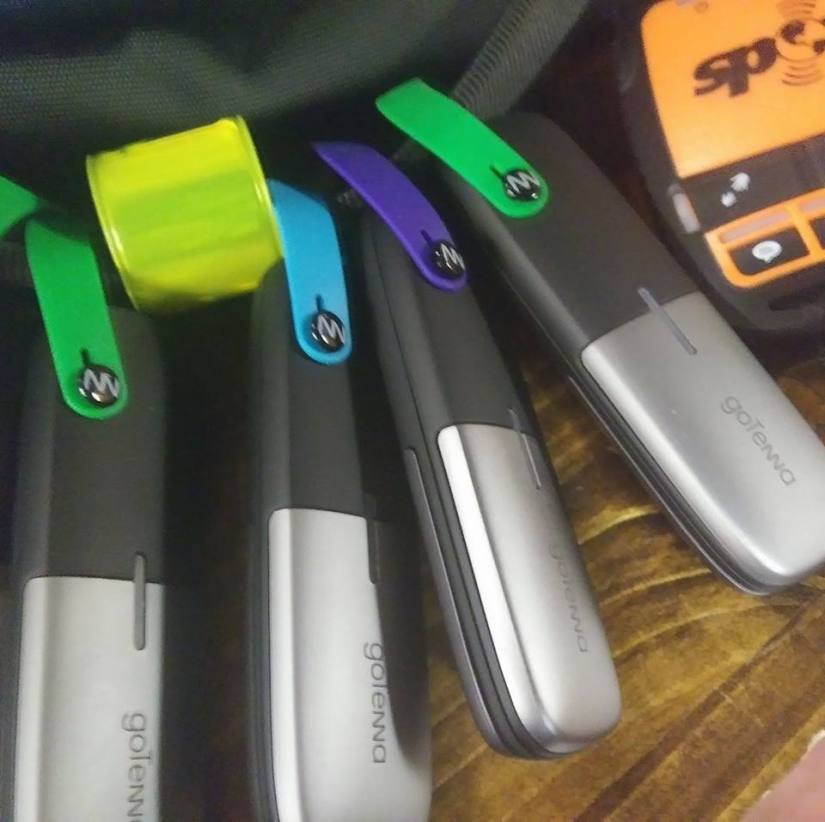