It has now been almost two years since hurricanes Irma, Maria, and Jose and numerous mudslides hit Puerto Rico and the Caribbean leaving a path of absolute biblical destruction.  Over 93% of cellular communications; over 90% of power and home/business wifi were taken out.  Serendipitously, at the same time the hurricanes started hitting, Gotenna released the very first (and still only) consumer-ready off-the-shelf long-range mesh communication device, the Gotenna Mesh device.  Uniquely, Gotenna offers encryption making them the only viable HIPAA-approved comms device when all else fails. 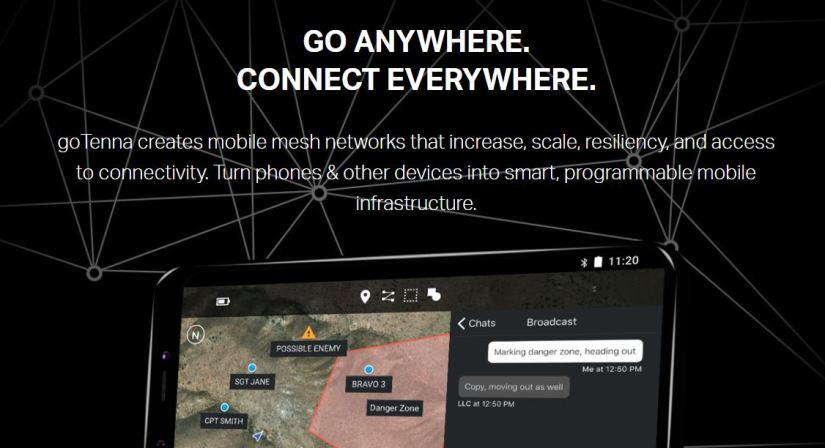 Gotenna Mesh works in an ad hoc or peer to peer (p2p) manner without requiring infrastructure (no home wifi, no satphone, no cell towers needed) it just works.  Gotenna is entirely self-sufficient and offers a 3-4 mile range (under ideal circumstances up to 57 mile range) for each p2p hop- and allowing up to six hops.  They are reasonably priced at only about $50 a piece and they can intelligently and selectively backhaul across the internet, cell networks, wifi, satellites, or any available network to get to any recipient anywhere in the world, even if they don’t have a Gotenna device.

After the hurricanes, Gotenna partnered with PR Reconnects to create an indiegogo-type public fundraiser to raise about $20,000 in order to buy at least 300 Gotenna mesh units to distribute them to create a backbone across the island to enable crucial communications for first responders aiding in the relief and recovery effort in 2017.

The units were to be delivered in installments.  The money was raised fairly quickly; however, after the first shipment of 80 arrived, Javier, GoTenna, and PR Reconnects went dark – no updates, no publication of node deployments, unresponsive to questions. 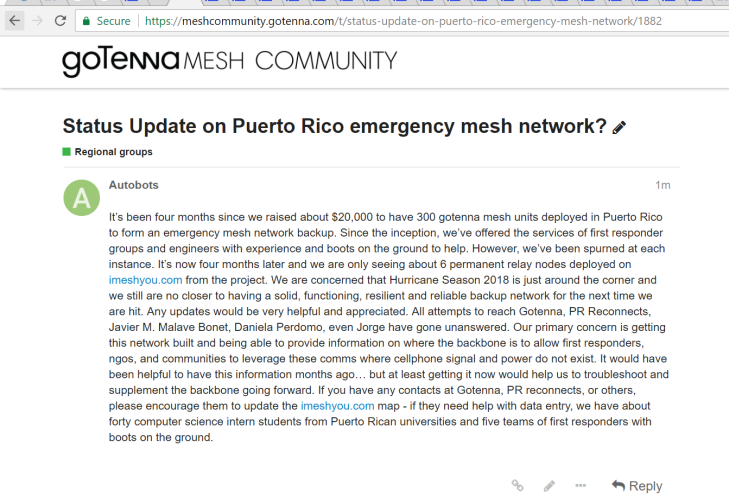 Separately, in parallel, DHS (FEMA) and DOD spent about $800,000 in taxpayer funds on Gotenna Mesh units.  However, to this day, 2 years later, only about 10 of the nodes (and substantially only in San Juan) are published on imeshyou.com (or anywhere) to allow communities, NGOs, and first responders to leverage this infrastructure.  STILL ONLY ten or so of the 300+ units funded by donations and/or taxpayer funds – ONLY ten have been deployed and their locations published on the map and NONE of the DHS or DOD units seem to have been deployed.

Map below actually shows devices installed BEFORE the fundraiser (and in several cases nodes established by other, 3rd parties – such as, e.g., “Jayson Call”).  Over the past two years, no significant changes have been observed on this or any other publicly available portal. 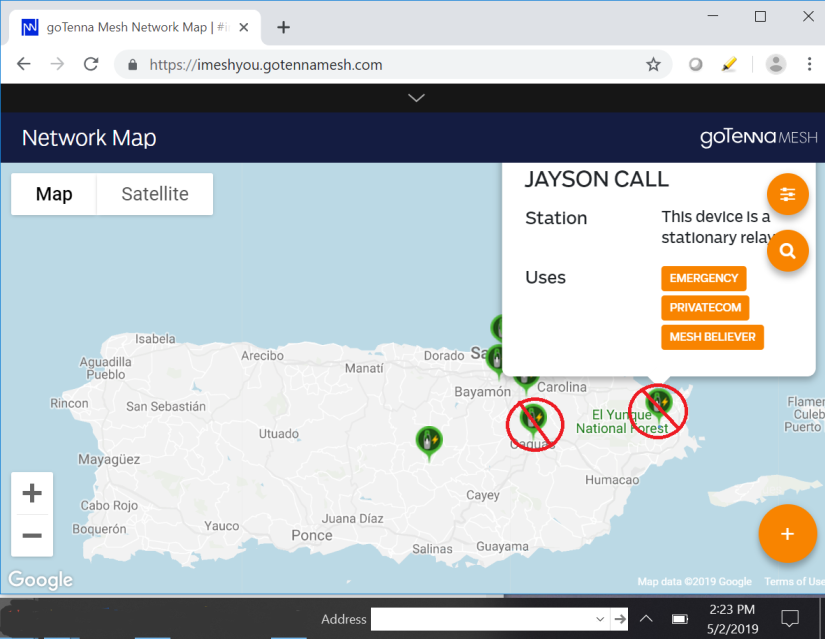 For months on their forum at imeshyou.com, by email, phone, by twitter, on facebook and instagram, I’ve tried to elicit a status update in bona fide good faith- earnestly hoping to encourage Gotenna to publish the locations of the public relays but with no luck.  Instead, Gotenna, PR Reconnects, and their partners have deleted my posts, suspended my account for 999 years (until 3017), deleted my account at Gotenna-controlled imeshyou.com and blocked my access on every social media platform available.  EVEN offered to pay me a thousand dollars rather than merely providing an update.

Straining the bounds of reason, they astonishingly have the temerity to virtue-signal prominently on their website (gotenna.com) that they actually helped Puerto Rico!? 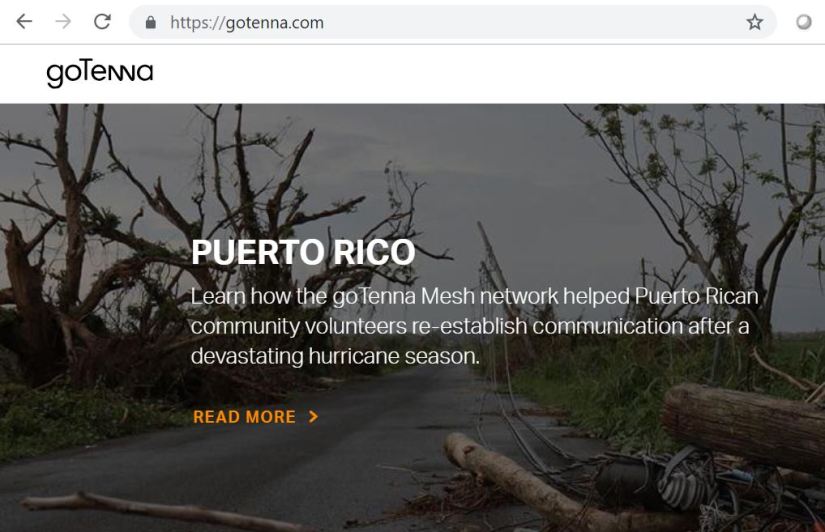 My concern is that Hurricane Season 2019 is rapidly approaching (2 weeks away) and we still don’t have ANY idea where the 300+ publicly donated Gotenna units are or if DHS / FEMA / DOD / Coast Guard have deployed even 1 to Puerto Rico or USVI.  To exacerbate issues, Gotenna decided to save a few pennies and wholly omit the GPS chip that was advertised.

As a result there’s no independent GPS functionality at all.  This means that the Gotenna unit cannot act as a headless SOS device by itself – but instead force survivors to have a working phone with a pre-installed Gotenna application.  AND there’s no beacon or advertise function of the permanently installed relays – and no restoration after power outage.  So, if PR Reconnects or Gotenna continue to delay and ultimately decide not to make this information available to the public (as they’ve done for the past two hurricane seasons), there is literally NO way for first responders, NGOS, or communities to leverage the taxpayer or the publicly donated infrastructure.  Moreover, since no one knows where they are and there’s no way to determine whether they are operating nominally – or not, there’s no way that anyone can maintain, upgrade firmware, recharge batteries, swap out defective units, batteries, or solar panels.

And to put a cherry on top of this sundae, GoTenna has now pivoted their attention to a new GoTenna Pro model which operates on WHOLLY dissimilar frequencies which makes the Pro model completely incompatible with this critical communications backbone that we built in Puerto Rico. What this means is that, for example: a grandmother in the mountains of Utuado, Lares, or Morovis (the first places to lose service and the last to have it restored) who sends out an emergency broadcast via the Gotenna Mesh network cannot be sure that the message will get out due to the lack of transparency and accountability of the donated build-out or the taxpayer buildout. Even *IF* this crucial backbone does work in relaying the message, the military and government first responders will be wholly deaf to her pleas (as they can’t even listen to the 902-927MHz frequency range of the Gotenna Mesh devices) as they are stuck in the 100 and 400MHz range of the Gotenna Pro.

Ironically, this then leaves ONLY the volunteer first responders, like ARES, MARS, RACES, CERT, Red Cross,  etc., the same people that selflessly run in when things go wrong to receive requests for help and respond.  However, with Gotenna and PR-Reconnects lack of transparency and obfuscation, these are the VERY people who have *NO IDEA* where these heavily-proximity based devices are -or if they are even able to receive relayed messages.

The Fema-based CERT (Community Emergency Response Teams) program (meant to integrate these volunteers into the national incident management system) promotes interoperability of communications devices, accountability: knowing where and updating the locations of emergency resources such as the Gotenna devices; AND “prior to an incident” practicing to ensure the interoperability, to make sure they work as intended to integrate these volunteers and NGOs into the disaster recovery picture… however, NONE of these critical Incident Command System / National Incident Management System (ICS/NIMS) guidelines are being followed. 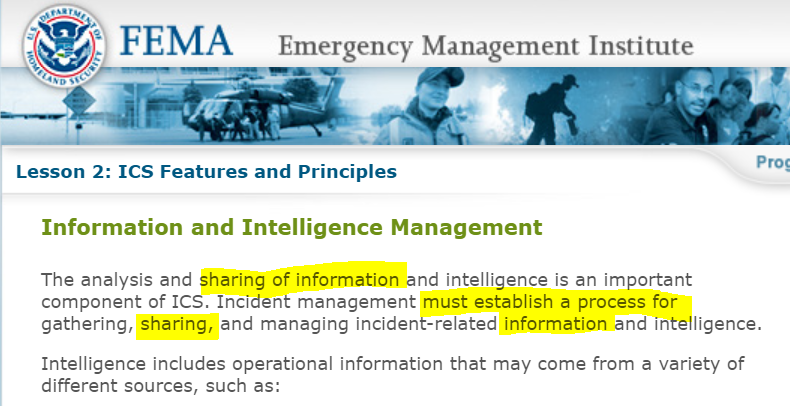 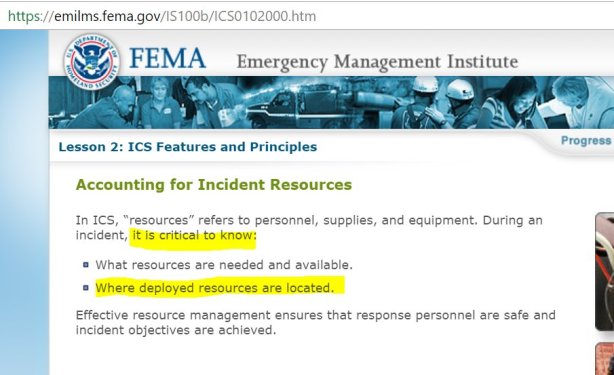 I am very concerned that if Gotenna and PR Reconnects don’t adopt a sense of urgency, and start following accountability and transparency best-practices, many people, many Americans will die.  Things aren’t better in Puerto Rico, USVI, or the Caribbean. *TEMPORARY* solutions have been hastily thrown together.  The power and communication lines were strung together in expedited manner; families are living in tents; blue tarps cover roofs, or mere ropes tie down tin roofs.

The first thing that needs to happen is that GoTenna, PR Reconnects, and Javier J. Malave Bonet should simply publish approximate locations of these 300+ deployed emergency relays.  Secondly, Gotenna should act with all due haste to issue an updated firmware that provides power-restoration after outage, beacon and advertise functions so that this network can be tested, supplemented, and troubleshot BEFORE the next disaster. Thirdly, if possible, the software defined radio (SDR) in the Gotenna-Pro should be updated to allow for even minimal operation (such as reception alone) in the 900MHz consumer ISM frequency band to at least receive calls for help from nearby civilians and responders and Gotenna should make it more clear who can use Gotenna Pro devices.  Are FCC certified ARES / MARS / RACES / CERT volunteers legally allowed to operate within appropriate frequencies?

Further, Gotenna advertises a GotennaPlus subscription / free-trial service which allows sms or text relay whereby if the intended recipient is not found on the local Gotenna Mesh network, the message is forwarded via the internet and sms / text networks to get to a non-local recipient anywhere in the world.  Puerto Rico has had Text 911 service in all 78 municipalities for over 5 years.  Yet, Gotenna stubbornly refuses to allow any emergency messages to be sent to text-based 911 services. 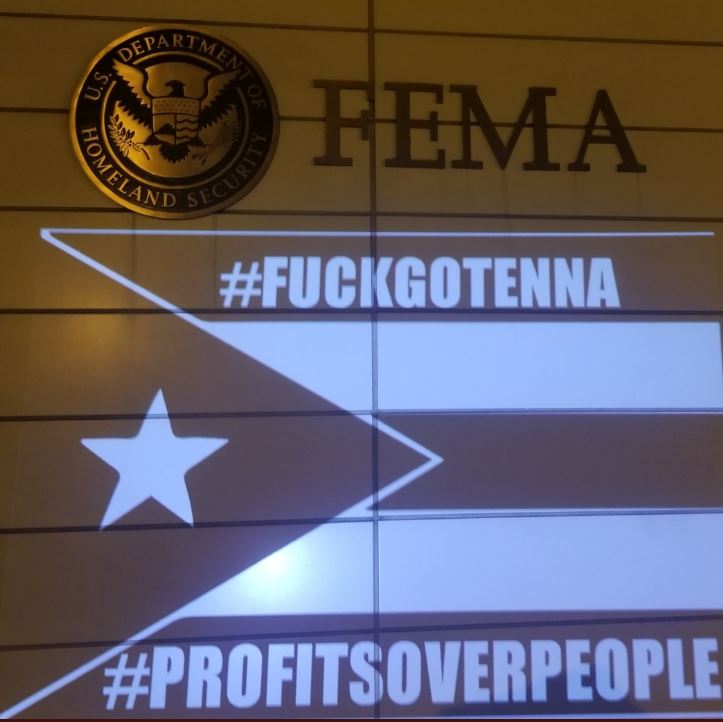